Some Area 51 fact or fiction examples of the type that keep the rumors going. 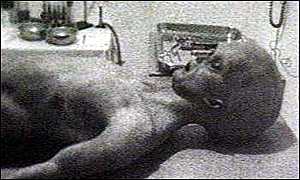 Rumor:
UFOs are guarded by the American military. A videotape was allegedly smuggled out of Area 51 some years ago showing an alien being interrogated by the US military. The film was reportedly shot after The Roswell Incident in 1947, when a UFO is said to have landed near Roswell, New Mexico.

Fiction:
In the film “Independence Day” Area 51 is a Top Secret base, unknown to the President of the United States a recovered UFO has been restored, presumably from Roswell and is ready for flight. With aliens also being held on the site, the President has no knowledge of the base as neither do the some of the top brass in the White House.

Fact:
Families of some of the workers at the base recently tried to bring a law suit against their relative’s employers. Subjected to harmful substances over a period of time some of the workers died. But as the government does not acknowledge their existence as a mater of security, the case had to be dropped. It seems even workers rights don't apply when it comes to Area 51.