Roswell Area 51
What's the connection
if any...

In 1947 Roswell New Mexico and Area 51 became linked, or did they. The possible Roswell Area 51 connection come about though the alleged UFO crash landing on a ranch just outside Roswell. There were reportedly two crash sites although this article only focuses on one crash site.

Incident =Roswell Area 51=
On June 24, 1947, pilot Kenneth Arnold reported seeing disc- or saucer-shaped objects flying at high speed near Mt. Rainier in Washington state. In the days thereafter, hundreds of reports of the new "flying saucers" (or "flying disks") appeared in newspapers across the United States.

During the first week of July 1947, rancher William "Mack" Brazel discovered a large amount of unusual debris scattered widely over his ranch about 75 miles northwest of Roswell New Mexico. Neighbors told him about new "flying disk" phenomenon and suggested he go to Roswell to report his find. Brazel informed the local sheriff in Roswell, George Wilcox, that he may have found a "flying disk" and Wilcox then contacted the local USAAF airbase in Roswell. The base commander, Colonel William Blanchard, sent his head Intelligence Officer, Major Jesse Marcel, with the head of the Roswell Army Counterintelligence Corps, Sheridan Cavitt, to investigate. Marcel and Cavitt went with Brazel to his ranch, retrieved some of the debris and returned with it to the Roswell base on the evening of July 7. Some of the debris was later flown to Wright Field in Dayton, Ohio, home of the Army Air Force's aeronautical research labs.

Press releases and news =Roswell Area 51=
The next afternoon, July 8, Col. Blanchard issued an official USAAF press release from Roswell reporting that a "flying disk" had been found "sometime last week" by a local rancher and that it had been recovered by the Intelligence Office at the base for transfer to "higher headquarters". United Press also reported that residents near the ranch saw "a strange blue light several days ago about 3 a.m." The press release caused a media feeding frenzy and phone lines into New Mexico and the Pentagon in Washington D.C. became jammed as reporters clamored for more details.

Within an hour of the release, the head of the Eighth Army Air Force in Fort Worth, Texas, Brigadier General Roger Ramey, began changing the story. The object retrieved was now a weather balloon with "hexagonal" radar target attachment. He would later describe it on the radio as "remnants of a tin foil-covered box kite and a rubber balloon" and denied there were any identification markings or instruments found with it. 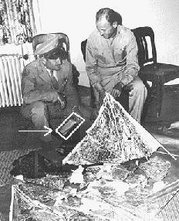 Gen. Roger Ramey (kneeling) and chief of staff Col. Thomas Dubose posed with weather balloon and radar reflector, July 8, 1947, Fort Worth, Texas. A controversial message about what happened is in Ramey's hand.

United Press also reported that Ramey said, "he couldn't let anybody look at the thing or photograph it because Washington had clamped a 'security lid' on all but the sketchiest details." However, he thought it was "...nothing to get excited about. It looks to me like the remnant of a weather balloon and a radar reflector." He said he would bring in a weather officer to confirm this. Soon after, a weather officer was summoned to make the identification official. Ramey had pictures taken of the weather balloon and radar target displayed in his office, which he said was the recovered Roswell debris.