If you have taken a picture of a UFO and would like to add your photo to our UFO photos gallery please register at the bottom of the page.

Is this fake or is this real. 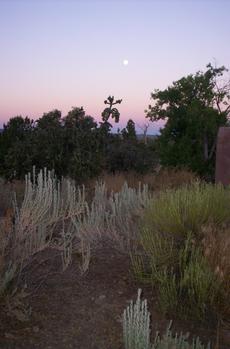 This is a full moon and not an orb... 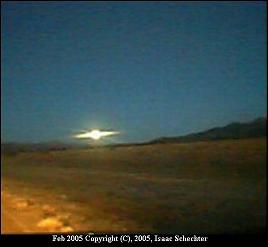 This photo was taken with a camera phone. With the advent of camera phones there will be more and more pictures taken of unidentified flying objects.

Is this the proof you need? You Decide. Thank you to Ivan for the UFO Photo below, as you can see in the close up, the object is showing a shadow, (from the sun) on the underside. Is this a true UFO? 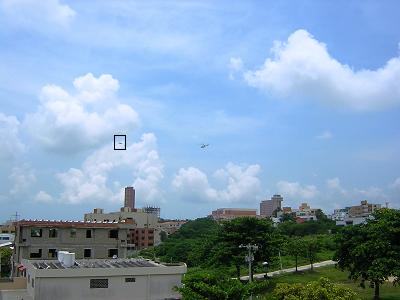 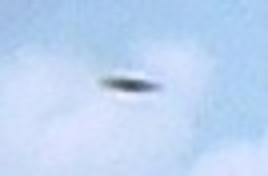 My name is Ivan Pedraza I am a graphic designer, 46 years old. The photo was taken with a 3.5 megapixel Canon Cybershot digital camera. The day was Monday 05 January 2006. It was sunny and many clouds sparced. The time was 4:14 p.m. (afternoon)
Location: Barranquilla, Colombia (Northern coast.)

I never saw the object. I was pointing the camera to the helicopter hovering the city. I took three pictures but only in the third one appear what it seems a lenticular object, but is somewhat blurry. I enclosed two of them.

In the helicopter there was some politicians of our city. Coming along with our president there was another helicopter a military one but it was in the other side of the buidling and I just could heard the noise. I was in a fourth floor. 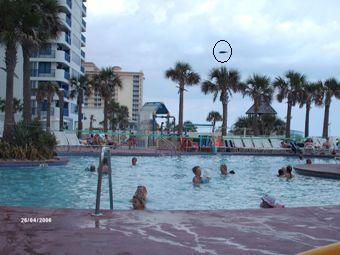 This photo was taken on August 22nd 2006 In Daytona Beach Fl. It was taken near the beach at approximately 2:30 PM with partly cloudy skies using an HP 5mega pixel digital camera.

Thank you for your UFO photo Kaylie. After enlarging the image you could say it looks like a large bird, however I am not convinced this is a bird or is it? 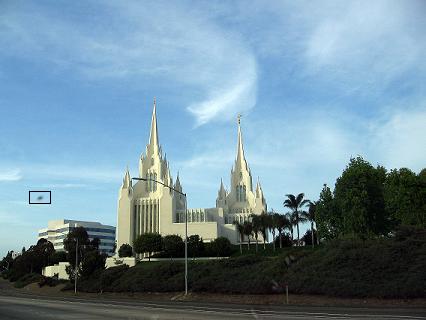 I took it while I was driving North on interstate 5 in the Golden Triangle area, La Jolla California. The church is The Church of the Latter Day Saints. I told my daughter to roll down her window, and stuck my arm over her and pointed towards the church and took the picture. I didnt see the dark object until after I downloaded the images onto my pc the next day or that evening. If you look at the clouds to the right and up, they look like that thing just zipped out of them and the draft was pulling them after it a little ways.

My friend said that the building underneath it and to the right was a hospital but that the object was too large to be a helicopter. I dont know but its wierd. You check it out and see what you think...

Thank you Kelly. Keep your UFO photos coming in. 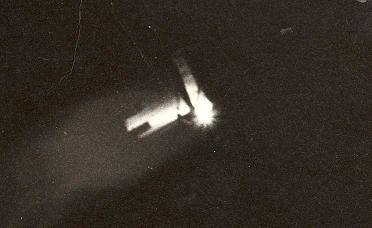 Hi, I am a retired wedding photographer. After leaving a wedding reception late at night in 1972 I looked up at the sky and saw a bright light. I had a few exposures left in my camera so I set the lens on infinity and took a photo of the bright light The enclosed photo is what I saw. I have only showed it to family and friends and forgot about it until I came across your website. I hope you find it interesting.

1972 well how many people have kept their old pictures, its great to see. Thank you Lee

It does not matter where or when your ufo photos were taken, we will be pleased to include them on our site. 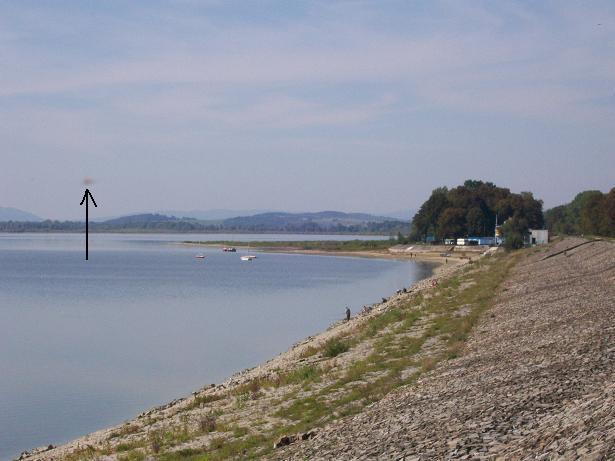 Hello Mark Dutot I send you picture taken with the Kodak Easyshare C743 in Otmuchow lake in Poland. 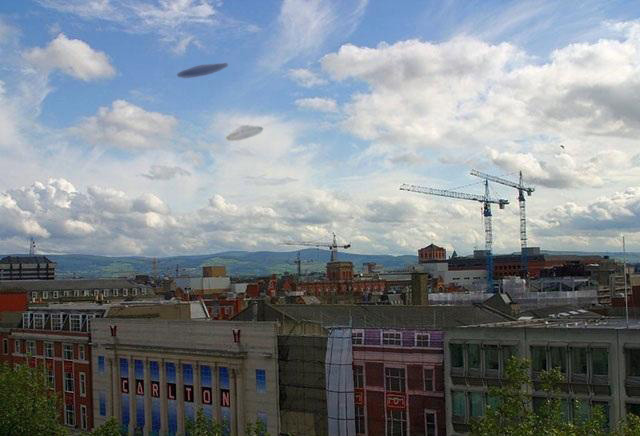 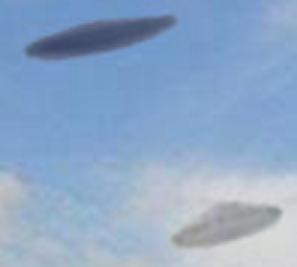 I am uncertain as to the conditions that have being asked for with regard to weather conditions, date, time or the exact place, i just know that it was taken in Dublin with a cheep digital camera, (3 or 4 megapixles I think). Mainly because it was not me that took the picture but rather I found it on my camera after it was given to me. I am sorry that I could me provide much more information, but thank you for your time with this. 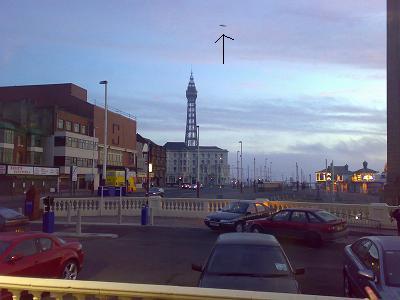 I am from England and this was taken by my Uncle XXXXXXX XXXXXXXXXX (name withheld by site editor) on a Business trip to Blackpool. He has severe shakes so the picture was taken by his Tai wife who accompanies him as his nurse. Shortly after this was taken he was taken to court for mis representing Blackpool's image by using what they say could only be a duck flying past the camera. This broke his heart and now lives in Scotland as a recluse with his two pet dogs.

Please take this opportunity to have a look as he swears at it was real and has two witnesses, i feel it would be a good sighting to have. Plus i looked into it and its very clear too, you can see the chewing gum on the streets. 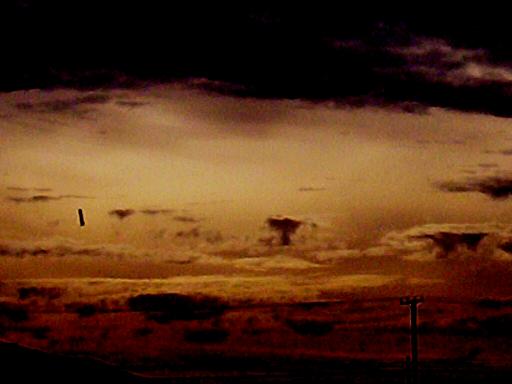 Menifee Ca. is the place. The date was in 2007 I cant remember the month or day. It was about 10:00 am if I remember right. The weather was very cloudy. My name is Randy Englehart and the Camera was a Kodak digital camera EasyShare C300. I had the zoom lens out. The thing I saw was rectangular in a vertical position, solid black in color. It did not make any noise or move (it was as though it was fixed in the sky) It stayed their for about 5 minutes and then slowly moved straight up until it disappeared in the clouds. I am not sure of the size but I would say It was about 60 feet tall and 15 feet wide. It was much bigger than my pictures seem to make it look.
I have no Idea what it was but I suspect it could have been some sort of giant camera. I hope the pictures reach you okay as I am not to computer savvy. Thanks. 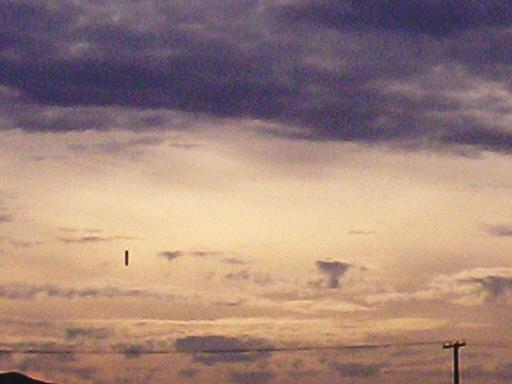 Thanks Randy, the pictures reached me just fine, thanks for your contribution.

Thank you for sending us your UFO photos, keep them coming.

All of this does not mean that UFO proof is not out there. But do we really want them to land on The White House lawn...

There are many sightings every day by people from all walks of life. Just because you have not seen one yet does not mean that you never will.
Keep an open mind when looking at all UFO pictures. Remember most UFO sightings can be explained. It's the few that just can't be explained that hit the headlines. Follow this link to see a collection UFO pictures that have been collated and presented in video format's by Scott Corrales. All rights reserved.

We look forward to receiving your photographs. Help build a gallery of sightings, ask friends that have taken UFO photos to visit us and include their picture on our site.